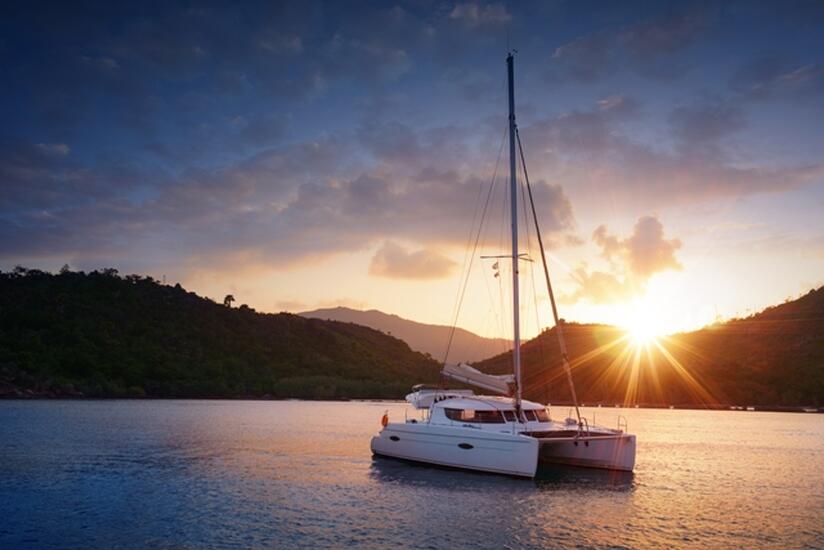 People often ask us what a cruise ship vacation is different from sailing on a yacht. They say that both are water, and you can play golf on the liner as well. The answer is simple and lies in the question: the liner is associated with leisure and unhurried tourism, and yachting with a real journey.

We in Check in Sea, the first association that occurs when the word "yacht" - is "freedom." Perhaps, with it we will begin.

So, what can a cruise ship give in terms of freedom? Quite a lot - visiting new countries, walking or bus tours in major port cities, for example. On board, you can go to bars, swimming pools, from deck to deck, visit each other, meet people and shout into the void “E-gay, kanalya!” But, in general, such freedom is very limited: a tourist exists within the framework of the liner, spending time as in a multi-storey shopping and entertainment center. This, in its own way, is good, but not our format, no doubt.

Yachting is a priori more mobile journey. We, like a bee: vzhuh - flew to one place, vzhuh - already in another, vzhuh - the third. And each of them is where the liner does not go even on its side, and if it is pulled by barge haulers. We need only two or three meters of depth to feel comfortable, so we can anchor where we want.

For example (as it happens in one hundred percent of our travels), an unplanned stop in some empty and incredibly beautiful bay. Diving, swimming, sunbathing on the Caribbean sand and crawling on a palm tree behind a coconut is just about us. Those who float on a cruise liner float by and cannot watch us even with binoculars, because we choose places that are secluded and inaccessible to others. It should be mentioned that cruise lovers do not particularly want to consider what the yachtsmen are doing there - they have rest in their plans and they relax, lying by the pool on a sun lounger.

Those who choose yachting can leisurely stroll through the streets of small towns, where tourists do not make up the majority of the population. This, by the way, greatly influences prices in populated areas and, naturally, has a rather beneficial effect on the yachtsman’s wallet. For example, in Bergen - the largest port city in Norway - you can dine seafood with an average check of 60-70 euros. This is quite a lot, if you know that in a cute fishing village next door you can feed three elks with this money, learn the recipe for all the dishes and leave a generous tip.

We learn recipes of dishes not by chance, of course, but in view of the fact that you can fish and cook on a yacht. In the above-mentioned Norway, many go just to go fishing - in the northern seas is not a bite, but some kind of hysteria in fish. It is difficult to remember how many times the participants of our campaigns fought against the lures, raised “garlands” of sardines and measured themselves with the halibut. What can I say - fishing just canceled. But, unfortunately, participants of the cruise, it is inaccessible to them, like the Sun for Icarus - you will not throw a lot of gear overboard. And if it turns out to throw some lure, but to catch a predator, then it is absolutely incomprehensible how to raise it on board and what to do next with it. It is unlikely that the cook of any liner restaurant will appreciate the skills of the hunter from the angler and will take up the further transformation of the catch into an edible look.

It is quite another thing when culinary competitions begin on the boat. The frequency index of such “battles” also tends to a one hundred percent mark - there is not a single expedition or campaign in memory when the kitchen did not attract three or four participants at the same time.

It is also important that when traveling on a yacht, it is easier for all participants to come to an agreement. As a rule, the team of one snow-white beauty is 8 people. Somehow it happens by itself that on the second day everyone perceives each other as family members, not the crew. Of course, it is much easier for such a family to make a decision and, as an option, to collectively climb a volcano, go on an excursion, extend their living on a deserted island or invent other active activities. All this is not available during cruises - there are several thousand people who live on a schedule that cannot be changed.

You just need to know that, according to statistics, the average age of passengers on liners is 50+ years. In pairs, go on a cruise of 75%. A fairly accurate cut, according to which one can safely draw conclusions: a large part of the rest is of a very respectable age, consisting in different degrees of kinship. Of course, if a person prefers cruises, it does not automatically mean that he is a pensioner in his heart (it means it means), just a rocking chair is more suitable for him than another kind of recreation, which yachting has the same attitude as a window to a guitar. In the same sentence, you can meet both concepts, but no more.

Sailing yachts and trips to them - this is something special. They give so much emotion that their total volume or weight cannot be measured. You can’t say “30 kilograms of joy” or “half centner pleasure”. For example, fear is easier to measure. For example, in a forest, when meeting a newly awakened bear, as a rule, it stands out about half a kilo of fear. Sometimes more.

With positive emotions, everything is different - counting the number of admiring breaths is hindered by the constant atmosphere of romance, the all-encompassing sense of freedom and the effect of Benjamin Button - anyone who steps on board the yacht is again 18 years old and is sent to conquer uncharted horizons. Even in cases where the unexplored horizon is a neighboring island in the waters of the Saronic Gulf.