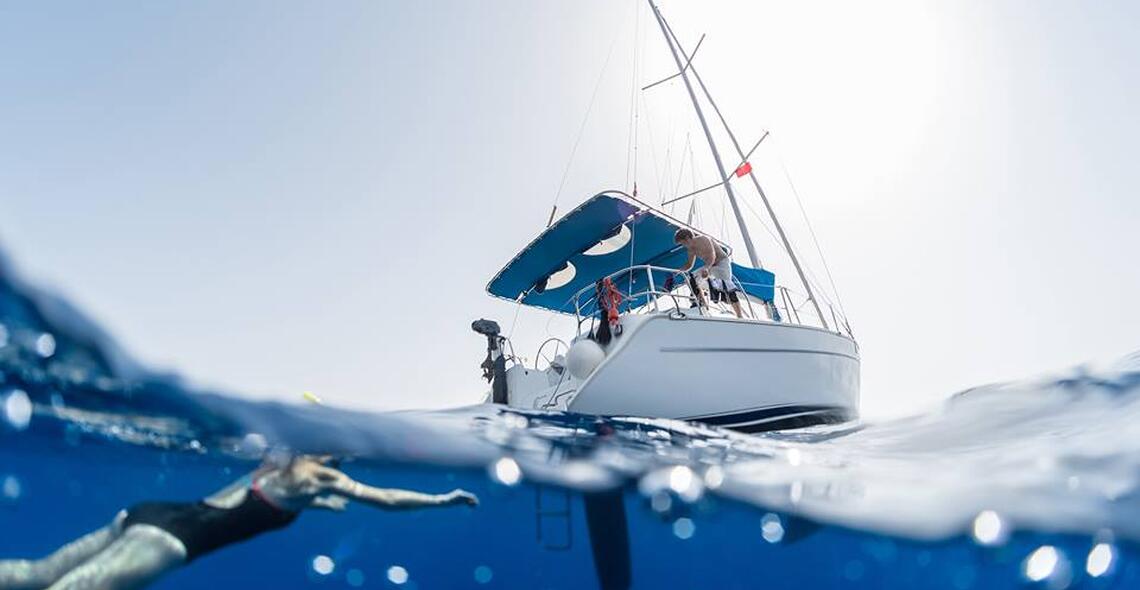 How does the yacht

Living on a yacht is not only possible, but even necessary. Judge for yourself - a trip on a comfortable yacht and a daily change of landscapes outside the window turns out to be much more interesting and much cheaper than renting an average room for a week in the same Norway or Iceland (or a dozen other countries) and traveling on foot, by taxi or bus . As they said in one famous advertisement: “Why pay more?”

But today is not about housing prices in Bergen. Today we will talk a little about how the boat is arranged outside, and find out why it is almost impossible to turn it upside down.

So, outside we have a steering wheel (or even two), which is connected to the feather of the stern steering wheel. According to legends, it was invented by Chinese masters in the first century of our era, but began to receive widespread use after a good thousand years. Prior to this, ships were kept on the right course with the help of side oars.

In addition to the steering wheels (or one) outside the yacht, you will definitely see a cockpit - such a recess with places for sitting and lying. The place of constant deployment of a friendly company on the street is something like an arbor with a table, anecdotes and a view of the sea. It is impossible to pass by the cockpit, since you can only get inside the yacht through it. It is interesting that initially the cockpit was called the cockpit arena. Now, on the yachts, they especially do not carry out fights in the cockpits, except for games: in scramble, monopoly, activism, checkers, and so on.

Leaving the cockpit and going out to the stern or the side of the boat, you can see that the whole yacht is surrounded by a fence of strong harness - leier. Special cables, which are stretched between the vertical posts and serve as a sufficiently weighty argument against rolling something into the water. For them, you can and should hold on, sneaking along the sides to the bow of our boat. Namely, we are going there to finish our acquaintance with the outer visible part of the yacht.

Spending time on the bow of a yacht is a rather exciting experience. You can hum Celine Dion “My Heart Will Go On” under your nose and, spreading your arms, catch the wind in your face. But this is already in the process of travel, and we are getting acquainted. Therefore, we turn 180 degrees and say: “WOW”, - in front of you there is a large interlacing of ropes, cables, canvases and transforming structures. You can call all this splendor sailing. Speaking wikipedichno, this is the whole set of equipment sailing ship.

It is divided into sails, spars and rigging. Just remember. Sails - everything is clear with them. Mast - rigid elements for setting sails, for example, the mast. Rigging - tackle from ropes. If you go into details, then the rigging is divided into two groups, but let the captain pass on this knowledge during the tour. And even better - sign up for courses at our Yacht School, where the instructors will generally explain everything in detail and tell.

Then we will talk about the part of the vessel that is below the waterline, therefore, having finished an external inspection of an imaginary yacht, we dive into the same imaginary water - there lies the secret of the yacht’s stability. It sticks out straight from the bottom and looks unnaturally long. This is the main weapon against swaying - a false hood - a heavy, cast iron or lead ballast piece of a yacht. It can weigh several tons and works according to the understandable principle of "tumbler" - as the yacht does not tilt, it will return to the vertical position again. Gravity, after all.

The ballast system of the yacht not only makes it strive for a vertical position, but also serves for other purposes - the quenching of the energy of water and wind. If the boat did not have such a counterweight, the side wind would blow it to the side more strongly, because both sides have a good sail, and the center of gravity is much higher. Without such ballast, all the yachts would have jumped in the wind through the waves, like an autumn leaf through the puddles in the park.

In addition, the heavier the boat, the harder it is to shake it, so the yacht practically does not respond to small waves - they just crash against the side and accumulate in the memory of the fervent splash. Remember the leaflet from the park? If you attach half a gram to a lead weight to its lower part, will the situation change? Of course - now even if the duck is splashing nearby, the leaflet will not care. The main thing is that the duck knows the International Rules for Preventing Collision of Ships and not cause trouble when she is ready to move to another area. By the way, in the Check in Sea Yachting School, the MPPCS is taught in such a way that even a duck can become a sea wolf. Or a she-wolf?