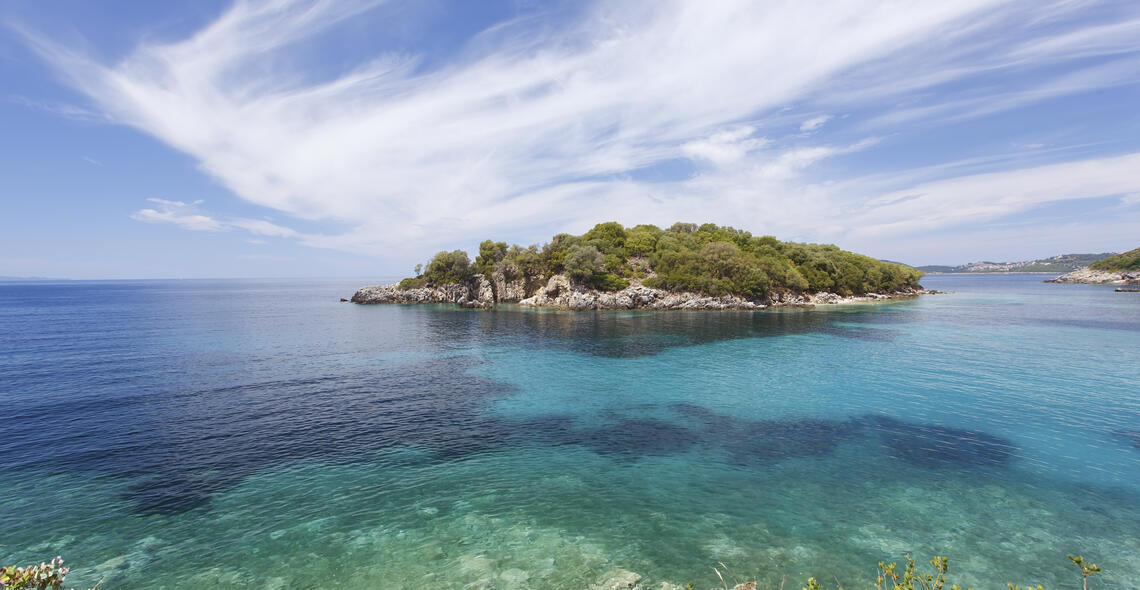 The country of the three seas - Greece

We count the days before the start of the season in the Mediterranean and therefore we decided to talk about it today - Greece - the cradle of Western civilizations.

The country is located on the Balkan Peninsula and more than two thousand islands scattered across the waters of several seas. Such names as Aegean, Ionian, Mediterranean and Libyan usually appear. Sometimes you can find other names - Thracian, Mirtoi, Ikaria, Cretan, Alboran, Balearic, Ligurian, Tyrrhenian, Adriatic, Ionian, Cypriot - and that’s not all.

Today, most of the seas are considered integral parts of the water area and are not separated on maps. Therefore, it is assumed that in the east - the Aegean, in the west - the Ionian Sea, and in the south - the Mediterranean. We will tell about each of them in a little more detail.

Halkidiki is the most resort place of mainland Greece. More than four dozen beaches are marked with the "Blue Flag"! This is about something, yes it says - at the disposal of tourists the best places for sunbathing in Europe. Yes, and in such quantities. Taverns, restaurants, hotels for every taste and budget - all this good on the coast is more than enough. And in general, Greece in this part - like a young port cat - has no place to hurry, and the abundance of tasty and affordable food makes us get a gastronomic orgasm over and over again.

In the basin of the Aegean Sea developed a host of ancient civilizations - Ancient Greece, the Byzantine and Ottoman empires, the Venetian Republic. Oh yes, these purest aquamarine waters have seen a lot in their lifetime. It would be great if the sea could tell its story. Ah, dream dreams.

The name of the sea is also rooted in antiquity. Of course, there is no consensus, but there are only three main versions. The most boring of them (and most similar to the truth) hints that the name originated in honor of the city of Aigeus (Aigai), located on the island of Evia.

Another less popular version says that the etymology of the name lies in the ancient Greek translation of “waves on water” - “eg” and “Aynes”, respectively.

A more popular version says that the sea owes its name to the Athenian king Aegeus, who allegedly threw himself from a cliff into the sea, having decided that his son Theseus died in a fight with the Minotaur. Actually, Theseus, according to the legends, expectedly piled the Minotaur, but when he returned home, he forgot to change the black sails to the white ones and thus signaled his father to go down into the abyss.

The deepest sea in the area - 5121 meters! Of course, coastal waters abound in shallow waters, but, you see, quite an amusing fact: in a small sea, completely covered with islets, there is a place where impressive depths prevail - almost half the maximum on our planet. It is also noteworthy that the only region of Greece that has never been under the rule of the Ottoman Empire is the Ionian Islands.

The name of the sea received, most likely, from the Ionians - one of the four main Greek tribes, which in the XI-X centuries BC. e. colonized Ionia, and VIII-VI centuries BC. e. founded settlements on Kefalonia and other islands of the western coast of Greece.

Of course, the Greeks would not be Greeks, if they could manage only one explanation of the name, without appealing to myths and legends. If you briefly convey the essence of a different version, the sea owes its name to Io, the former priestess of the Argive Hera, who swam across the waters after turning into a cow either by Zeus or his wife. There, in fact, it is not very clear, from where Io herself appeared — the river god Inach was recorded as her father, then the unfortunate Prometheus with the eagle-spattered liver, or Ias, who himself is the son of either Argos or Triop. In general, Greek mythology makes it easy to get lost in the versions and assumptions - the only thing is that the history of the region is saturated with events of the most “impossible”.

It is not surprising that this part of Greece occupied a special place in ancient Greek literature: the sea was also glorified by one of the most eminent poets and narrators — Homer — in her Odyssey, in which, as we remember, it took place on Ithaca seas.

In the same waters, there were events that are not in doubt - the final battle for the Roman Empire. In a scuffle, personalities of a truly world scale took part: well-known commanders and military leaders — Gaius Julius Caesar versus Mark Antony and Cleopatra from the Macedonian Ptolemaic dynasty. Drachka was truly great, read on the Internet - the events are described quite interesting and there is no reason to doubt their reality. In short, Caesar piled Mark and Cleopatra pushed from the battlefield.

Probably, this is a reservoir with one of the most interesting stories of education. About 6 million years ago, before the advent of the Strait of Gibraltar, it was connected to the Atlantic Ocean only by a small strait. Its valley can be found now in the territory of modern Morocco. In the epoch of glaciations, the level of the World Ocean decreased by a good hundred meters, and this led to the fact that the strait dried up and the Mediterranean Sea turned into a lake. It is impossible to establish exactly how many times the lake basin has almost dried up until some trouble has occurred.

At that time, various troubles happened quite regularly, the planet only became conscious of it after gradually subsiding cataclysms: supervolcanoes, glaciers, space bombardments, the birth of life and other delights of evolution. Already formed many mountain systems: the Alps, the Andes, the Himalayas. All of them were high enough to change the air circulation in the atmosphere and begin to shape the modern climate.

The first hominid thought that it was time to get off the tree and go in search of food. Before the appearance of something similar to the modern man, there were still a couple of million years. Suddenly, unexpectedly something shook! Historians agree that it struck about 5 million years ago for a standard reason - the movements of the earth's crust, which caused a huge earthquake. It was then that the waters of the Atlantic Ocean pierced the Straits of Gibraltar and flooded the Mediterranean.

Of course, there is another version with its army of supporters. According to them, confirmed by fairly fair observations, the Mediterranean Sea is a remnant of the ancient ocean of Tethys, which constantly decreased due to the movement of lithospheric plates. They are moving even now and will not cease until the planet cools. The African lithospheric plate of interest to us (the entire continent of Africa and the adjacent areas under the oceans) moves northeast at a speed of about two centimeters per year. For a million years, if you do not complicate the calculations with possible coefficients and logic, it overcomes a distance of about 20 kilometers. Not very much, on a planet scale, is it?

Rather authoritative researchers of the Mediterranean Sea note that the breakthrough of the channel of Gibraltar and the filling of the sea led to serious changes in the flora and fauna of the Mediterranean. Of course, this could not affect the future person - the speed of filling the dry lake system was incredible - the water level rose to 10 meters per day. You can imagine what happened to our ancestors and all kinds of living creatures that had to live by the water because of the need to quench their thirst and hunt. Of course, they were simply washed away to hell and nourished by their own ecosystem, in which with great pleasure various fish and other future seafood, sailed from the Atlantic, began to wind up.

By the way, it is from the waters of the Mediterranean Sea that the feet of modern maps grow, in which the top is always oriented north. The fact is that in ancient times coastal areas were the main center of the inhabited world. Of course, cartographers carefully and very detailed marked the territory to the north of the sea, and therefore from that era the top of the maps was oriented to the north.

Due to its geographical location, the Mediterranean Sea still plays one of the most important roles in the economy of many countries - shipping connects twenty-two countries that have access to water.

It is logical that most of these countries took advantage of the situation and develops such an industry as tourism. The Mediterranean is truly a universal region - for every taste and budget. Here you can find any occupation: retire on the Greek islands, enjoy the incredible landscapes of the Amalfi Riviera, hang out at the best discotheques of Ibiza, squander or win money at the Monaco casino, eat oranges in Sicily, get a buzz from walking on the Lycian trail in Turkey, explore the streets of Tunisia or the markets Algeria, Lebanon, Israel, Croatia, Albania, Egypt - a real Klondike of impressions and a huge variety of cultures and nationalities.