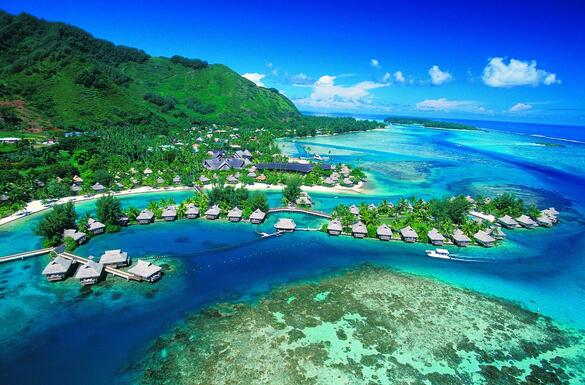 Catamaran cruise on the islands of Polynesia

The islands of French Polynesia located in the Pacific Ocean, and among them the islands of Bora Bora, are recognized as a paradise on Earth. It is here that you can forget about the daily bustle and worries, having arranged an unforgettable vacation. Yachtsmen from all over the world come to this picturesque corner of the Pacific Ocean to fully enjoy all the benefits of this holiday.

Sailing on Bora Bora will allow you to get in touch with truly wondrous nature. The island itself is interesting by the presence of the most ancient, currently inactive, volcano Otemanu, which is estimated to be almost 4 million years old. You will have the opportunity to climb it, so that you can admire the magnificent view of the Pacific Ocean from above. Traveling around the island, you will find exotic vegetation, represented not only by ferns thickets and orchards, but also by the finest orchids.

Going on vacation on a yacht to Bora Bora, you should certainly become acquainted with his underwater world, the best thing to do in the waters of the lagoon. There you will have the opportunity to see not only stingrays, but also barracudas or even sharks.

For yachting on Bora Bora, you will be offered a wide choice of vehicles on which you can not only drive around the island, but also stop at the most interesting places for you. As for the island itself, it is inhabited at the edges, and its middle is practically impassable thicket, where you should go exclusively with an experienced guide.

You can get acquainted with the local color by visiting the largest city of the island - Vaitape, which is also the administrative center of Bora Bora.

Yachting on Bora Bora is distinguished by the unique atmosphere of pioneering. Here the rest is connected with permanent discoveries, both underwater and above-ground, you will see a lot for the first time and will not see anywhere else. This and one of a kind coral gardens and hundreds of thousands of species of fish, this is an opportunity to participate in the feeding of sharks, and snorkeling.

As for the infrastructure, it is developed here at a high level and will satisfy even the most demanding tourist. When choosing a vacation on a yacht in Bora Bora, you should be prepared for the fact that both the flight there and the stay there will be expensive, but the received emotions and impressions will justify all your expenses.

The relief of Bora Bora includes three mountain peaks, surrounded by rich vegetation. The island itself is surrounded by a huge number of coral reefs and the world famous crystal clear blue lagoon. Yachting on Bora Bora is ideal for those who prefer a relaxing holiday, away from civilization and bustle. Who wants to feel alone, enjoy the silence and pristine nature.

If you are an adherent of active leisure, then boating on Bora Bora will pleasantly surprise you with the opportunity to visit various entertainment programs, which take place, as a rule, in the evenings. On them you will not only come into contact with the local culture, but also become a witness of fascinating and exciting fire shows, you can even visit theatrical performances. In addition, there are nightclubs, bars and restaurants on the island, where you can dance and relax enough.

Vacation on a yacht at Bora Bora offers its tourists to rent a ship with a transparent bottom, so that travelers can admire the unique underwater Pacific world without diving into the water.

Bora-Bora is amazing for SPA-lovers, on the island at your service will be not only SPA-salons, but also Ayurvedic centers, the distinctive feature of which is the use of exclusively cosmetic products made from plants growing directly on the island for all procedures. This guarantees the naturalness of such cosmetics and its unsurpassed effect, the benefits of such procedures will be much greater for the body than from visiting traditional SPA centers.

Going on vacation on a yacht to Bora Bora, you will find yourself in a unique place where it seems that time has stopped, where not only the body rests, but also the soul, where you get rid of everything superfluous and enjoy every minute of oblivion.

Another advantage that boating on Bora Bora has is the opportunity to reach the largest island of French Polynesia, Tahiti, at any time convenient for you, where the main infrastructure is concentrated: the airport, medical centers and other advantages of modern civilization.

In addition, traveling on a yacht on Bora Bora, you will have the opportunity to visit its tiny islands, which the locals call nothing but motu. When you get to such an island, you will usually see a small bungalow or a hotel where you can fully relax admiring the surrounding beauties of the ocean. And the most important is the purest water of the lagoon, which has no equal on the planet in terms of the wealth of the underwater world. The underwater world of Bora Bora will not leave indifferent any tourist!

Traveling through Bora Bora, you will have the opportunity to get in touch with the culture and history of its indigenous people. So on the island there are ancient temples "mare", the most concentrated in the northern part. In addition, you will be invited to visit the restored ancient temple of the Marais Marotetini, which is especially revered by the indigenous people.

As for the optimal time for rest, boating is possible all year round on the Bora Bora, which is achieved thanks to the ideal climate. A fantastic underwater world, exotic nature, secluded beaches and the opportunity to touch the unique ancient culture will leave in your memory indelible impressions about the rest. Every year, tourists from all over the world come to Bora Bora in search of new impressions and vivid emotions. And although not everyone can afford to rest in this part of the world, but having been here once, I want to go to these unique places again and again.

If you did not pick up a trip for the right time, place or number of people - we are ready to create you a unique journey that you will remember for a lifetime.